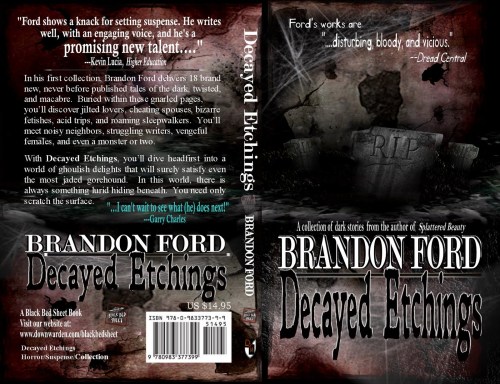 With Decayed Etchings, you’ll dive headfirst into a
world of ghoulish delights that will surely satisfy even
the most jaded gorehound. In this world, there is
always something lurid hiding beneath. You need only
scratch the surface.

“A very enjoyable read. I can’t wait to see what [he] does next.” –Garry
Charles, Hammerhead

“Brandon Ford is the new Prince of Horror, soon to be King.” –Ryan
Nicholson, Star Vehicle

“Absolutely delicious. Drags the reader along on one hell of a bumpy
ride.” –Robert Dunbar, The Pines

“Disturbing, bloody, and vicious. Pay Phone is not for the weakhearted…”
–Scott A. Johnson, Dread Central

“Truly terrifying and chilling right down to the bone. This one comes
highly recommended.” –Ed Demko, Bloodtype Online

Brandon Ford (b. August 28, 1981) grew up in South Philadelphia, Pennsylvania. He started writing at the approximate age of 8 and spent a lot of time testing the waters with various genres. He wrote dramas, comedies, essays, plays, and, of course, thrillers. There were few things he took pleasure in crafting more than a good old-fashioned scary story. Throughout grade school, as well as high school, he continued to build his portfolio with various works (mostly short stories and novellas, but a few plays here and there). He’d pass around these manuscripts to friends and teachers for feedback. Knowing others enjoyed his work and craved more inspired him to keep going.

A few months shy of 23, he sat down to pen his first novel, which became Crystal Bay. Arctic Wolf Publishing, a small press based in Georgia, picked the book up a few years later. Shortly thereafter, he completed Splattered Beauty, an ode to his favorite Scream Queens. In 2009, he teamed up with Alan Draven and Jessica Lynne Gardner for Creeping Shadows (Pixie Dust Press), a collection of three short novels. Ford’s contribution, Merciless, was heavily inspired by a real-life kidnapping that took place in California in 2002. In March 2010, Arctic Wolf released his third novel, Pay Phone. Ford has also contributed works of short fiction to several anthologies, including Abaculus 2007 and Abaculus III (Leucrota Press), Sinister Landscapes (Pixie Dust Press), Raw: Brutality As Art (Snuff Books), and The Death Panel (Comet Press). Some of his biggest influences have been writers like Jack Ketchum and the late Richard Laymon. In his spare time he enjoys reading, watching bad TV, and all things horror. He still resides in
South Philadelphia.

For merchandise of all kinds as well as a sample of the collection of stories and his thoughts, visit Brandon Ford’s website “Sleepless Nights”: