It’s an annual events that gives readers a chance to find new authors they might never have considered, and take advantage of discounts and giveaways to add to their ebook collection titles they’ve been searching for: Smashwords Summer/Winter Book Sale, July 1-31st and Flying With Red Haircrow is offering three items this time around.

“The House of Doom, Dreams and Desire” with its new cover and revisions is free, just enter the code SSWIN at check-out. 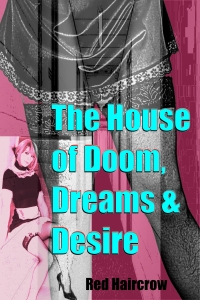 Description: “John Jones believed himself the most enlightened of gay men. Professional, well read and boyishly handsome despite his age, he also believed himself open-minded, tolerant and devoid of vice.

Yet he cannot resist the temptation of “The House”, a computer generated environment where one can explore their own subconscious in a safe environment. Safe except for the darkness you bring with you.

Psychologically twisted with disturbing images and surreal scenes that might offend some readers, “The House” is a mind and gender bending fantasy of a John in hellish Wonderland!”

Description: “Troubled residents come and go at the Care House where River Caulfield is a caregiver, working towards fulfilling his dream of becoming a nurse. When Silver arrives, a patient found on a roadside near death after suffering terrible abuse, River finds his previous personal detachment is compromised. Seeking to help the mysterious and enigmatic young man locked inside his own mind and memories, River finds his professionalism slipping as Silver begins to open up and live again.

But as their relationship begins to blossom, the roots of Silver’s past abuse and the abuser who forced him into such a mental state sends forth new shoots of darkness enveloping them in dangers threatening not only Silver’s sanity, but their very lives. With River’s devotion and help, will Silver finally be able to break away from his past? The answer lies in the words of a priest, a painting and a long walk through a churchyard harbouring the secrets of the enigma that is Silver.”

Description: “River had always known that living with a freed sex slave, even one as sweet as Silver, was never going to be easy. It gets a lot harder when his parents are killed leaving him to care for his young brother. When Social Services get involved he has a choice to make. Unfortunately, he makes a choice that leaves the relationship in jeopardy as much as the master who returns to claim his former pet.”