The Importance of Real Native Stories 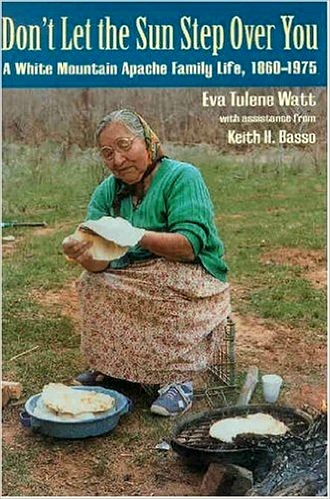 “Don’t Let the Sun Step Over You“, the collected stories by Eva Tulene Watt assisted by Keith Basso made me write my mother and say, “Tell me a story”…and she did. She did, and it was good! If you’ve read the work, you’ll know why I add emphasis just so in the previous sentence. And why I wanted to hear from my mother about our people, our cousins, our family, about the past that touches the present and the future. The stories she was told or the things she observed.

Re-reading “Don’t Let the Sun Step Over You” made me want to hear songs. Made me want to hear songs I’d never heard before in this life and songs I already knew. One of them was “I’ve Been Around”, a popular Apache song that somehow voices all those stories of the hardworking, big-hearted, fierce, gentle, humorous, resilient, pragmatic, whimsical and wise Apache. “They’re always walking, walking, going around and doing things. They worked hard!”
I hear my ggrandmother’s voice again, and the stories she told and tried to tell us even when we weren’t listening, only halfway or transfixed cause they seemed light, even funny, but were deep. Stories when she was cooking or cleaning or working or chasing us (me!) with a switch when I had done something she directly told me not to do but I did it anyway because I was stubborn and/or curious.

Stories tell you why you should do things or why not to do other things. They give you purpose. They give you hope. They help you remember why you’re here now, right this very minute and not just what our ancestors endured. Stories help explain why they are important, to be kept, and remembered so our children understand and know. Some stories are shared with non-family, not-of our People, but others are special. Knowing them helps you understand why we defend them and how when someone copies you, culturally appropriates, or takes and changes your stories into their fantasies, these critically important parts of your culture and identity, it is beyond offensive but also really hurtful. Painful. That they do not care, that they make excuses, rationalize or say its just “fantasy” or “honoring” you is even worse. It’s terrible for native identities and cultures.

Some do think they are honoring but obviously they’ve never read or really interacted in depth with native cultures or peoples. If they really knew/learned true history, not just the stuff written by mostly non-natives however expert the “world” thinks they are…if they really knew, they wouldn’t do it. They would understand. They would be respectful and learn without trying to “become” what they study or explore, or fantasize native “stories” into entertainment a.k.a. money-making schemes that boost their own image of themselves, positively reinforcing their centuries long mendacity.

J.K. Rowling in her new series recently represented by “Magic in North America” involves a form of native exploitation. Twitter has been alive with messages questioning the famously outspoken writer who has rebuked others for their racism, etc. Though this isn’t racism, it smacks of neo-colonial attitudes where commodifying and homogenizing the indigenous of North America is SOP. Such writers ignore how romanticized or villified portrayals of natives, doesn’t matter whether it is claimed to be fiction or non-fiction, has damaged, helped eradicate and further marginalize already oppressed indigenous populations.

Dr. Adriene Keene addressed Rowling’s work in a March 7th essay at Native Appropriations website: “Native spirituality and religions are not fantasy…These beliefs are alive, practiced, and protected. We fight so hard every single day as Native peoples to be seen as contemporary, real, full, and complete human beings and to push away from the stereotypes that restrict us in stock categories of mystical-connected-to-nature-shamans or violent-savage-warriors. Colonization erases our humanity, tells us that we are less than, that our beliefs and religions are “uncivilized”, that our existence is incongruent with modernity.”

I’ve never read Rowling. I’ve never seen any of the movies and I never will despite being a long time sci-fi and fantasy fan. I have read reviews and seen the genuine affection readers of all backgrounds have for many of the characters, however. Yet why is there’s always the time when a non-native says “Hey, let’s make it about Native Americans, that’ll be cool!” (a.k.a. make us money off them). Even if they do some research, its never seems to involve time or conversing with actual natives. Not just questioning or interviewing, but having devoted a relationship of some kind where there can be mutual respect. I really believe that would lessen exploitive and appropriative activities.

I’m sure they’ll be more dialogue as more of Rowling’s “new magic” makes it way across the world. For my part, I’ll keep reading work that is accurate and respectful even if fictional, because we are varied and real. If you want to read about Native Americans, fiction or non-fiction, why not read work by Native Americans? They’re out there and our voices are growing.